Due to COVID-19, Inner Cycle's studio locations are temporarily closed. However, you can still #loseyourself with us through our online LIVE classes on and off the bike! Click for full schedule.

To really know the Inner Cycle, you’ve gotta know the girls—Emily and Hillary—founders, owners, instructors, riders, and best friends.  And since they are both humble and don’t love talking about themselves, and because it’s more fun—we had them talk about each other!  So, without a ton of structure, direction, or filter—let’s get to know two of our favorite #BOSSBABES… 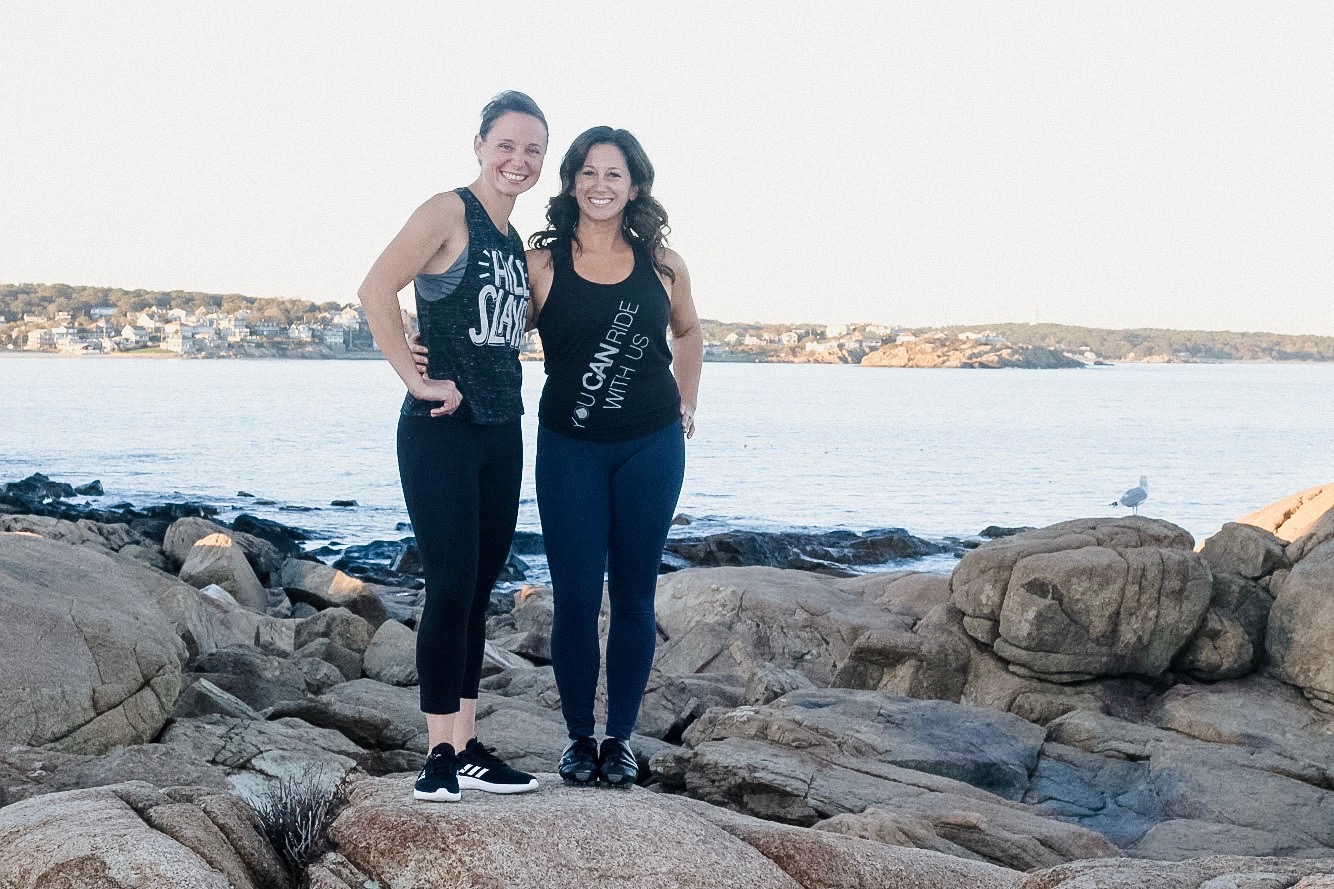 She’s a boss at sports and yard games (cornhole specifically).  She’s the youngest #beelady in her Bee School and a real tender to her Hive.  No, seriously, she makes lip gloss out of bee’s wax!  She hates awkward silence, and even though she is so damn smart, I tend to always be right.  She’s a finger knitter and possibly one of the oldest remaining thumb-suckers.  See…quirky!

As a friend she is the most loyal.  Hill is a foxhole kinda chick.  She would wrestle someone for you if you needed it.  Actually, even if you didn’t need it, she would do it.  She loves to wrestle.  She’s no drama and she is always down for anything.  You might think with three young kids that she wouldn’t always have the time or energy to maintain friendships, but it is just the opposite.  Hill will ALWAYS make time. She will put in more effort than anyone and make it hard to believe that she has three kids, a husband, a buncha chickens, five businesses and a hive of bees because she does it all so effortlessly.

As a business partner she’s a go-getter.  She’s one of the hardest workers you will ever meet.  And our combo is perfect—we truly are Yin and Yang.  She’s the bad cop and I’m the good cop.  It’s all a facade though really, because she is truly a total softy with the world’s biggest heart.  We know each other’s strength and weaknesses and we lean on each other in all the right ways. We balance each other perfectly and truly operate like a well-oiled machine.

As an instructor Hill is a beast.  She teaches a hard, athletic, competitive class.  I find her class motivating as hell.  But it’s also quirky, like her.  She will sprint to Dave Mathews Band and then the next song we will be climbing to Skrillex.

If you were to look in her purse I am betting you would find a cleat tightener (#spinlife), eyeliner, lost random keys, and a freakin’ kids’ dinosaur toy or something–she’s the best mom.

If I were to cast someone to play her in a movie, it would be Cameron Diaz.  Right?  She kinda looks like her, I think.  And if I had to pick out her last meal—oh, I got it—an organic, no anti-biotic, pro-whatever, grass-fed junior beef three way!  Beverly as hell, but still #ORGANIC.

Emily, Tiny Tim, Shmem, Pahtnah—she’s a stud.  She’s funny, nice, caring, and short.  She’s quick as hell, and incredibly smart.  She’s loyal—she’s run with the same girl crew since Kindergarten.  Everyone thinks they are Emily’s best friend, because that is just the way she makes you feel.  She is THAT person for everyone—always the first to know everyone’s secrets and the first one people call for advice.  She’s an incredible listener.  Everyone feels lucky to have Emily in their life.

Her dad died of cancer and his passing was a huge thing for Em—from that moment on she just gets after it.  She realizes that life is short, and she is inspiring to people in that way.  She does what she wants.  She thinks it is amazing to be alive and she makes other people want to be better.

Em is a great dog mom.  She used to be afraid of dogs, but now she has one of her own.  And she’s the best human mom too. Her and her daughter Maggie are a team—she gets on the floor and plays dolls and shit.  She’s shockingly good at yard games and can ski like a boss.  Oh, and she is great at picking and making lunch.  She takes her lunches VERY seriously!

She’s unorganized in a really refreshing way.  Her car is a disaster. And she’s kind of a baked bean connoisseur.  She’s a Bush gal—none of that B&M shit. She hates drama and vagueness.  She’s no bullshit.

On the bike she’s fierce.  While people can see her as a cute little Care Bear in the lobby, girl has an alter-ego in the saddle.  She’s a little Mad Dogg and a little Soul Cycle—she rides fast, but she likes her resistance too.  She’s just an all-around killer rider.  She digs deep, she likes to ride to rap music, and she’s a hardcore stud.

We are yin and yang—she’s good cop and I am bad cop.  She is soft and I am not soft.  It works perfectly for us.  She makes moves and takes risks.  She gets shit done and she pushes people around her to do the same.  But, she is thorough.  She does her homework and she delegates extremely well.  And she is smart—while staying very respectful.  She is never a know-it-all.

If I went through her purse, I think I would find everything but the kitchen sink.  Well actually, I wouldn’t find mascara because she has those luscious lashes now—so maybe some lip gloss, some checks, and then credit cards everywhere.  But honestly, she probably wouldn’t even be carrying a purse, she would probably leave it in her car unlocked.

If I had to cast someone in a movie to play her, I would go with Marisa Tomei.

If I got to choose her last meal it would be some kind a meat.  Meatloaf!  Wait, Lobster Roll with sweet potato fries.  Damn it, and a side of meatloaf.